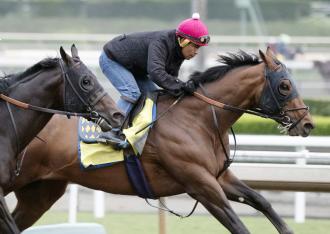 Gio Ponti had all the qualities an owner wants in a racehorse. He had class, ran a route, could run on any surface – especially turf – and won three Eclipse Awards. So how did he sire a horse such as Drefong, a high-class sprinter on dirt, in his first crop?

When Gio Ponti went to stud, people thought he would beget horses that got better with age and distance and racing on turf, and that might eventually turn out to be the case. To bolster that argument, he is the sire of Sir Dudley Digges, this year’s 1 1/4-mile Queen’s Plate Stakes winner. Sir Dudley Digges has been good at a route on both synthetic and grass.

But then there’s Drefong, who will seek his fifth straight sprint win in the Breeders’ Cup Sprint on Nov. 5 at Santa Anita.

Owned by Charles Chu and trained by Bob Baffert, Drefong looks every bit a pure sprinter. He has raced five times, winning his last four, and he exhibits high early speed. He increased his Beyer Speed Figure in each of his first four starts, and then paired career-best 103 Beyers in his last two. In his stakes debut and most recent start, Drefong won the Grade 1, seven-furlong King’s Bishop at Saratoga with something left.

From Baffert’s perspective, it is easy to see why the colt is a top sprinter.

"Drefong is the perfect specimen of a world-class sprinter,” said Baffert, who has trained more than his fair share of top sprinters. "His conformation is perfect.”

From a breeding standpoint, Drefong has notable speed presence on both sides of his pedigree. Gio Ponti is by Tale of the Cat out of the Alydar mare Chipeta Springs. By Storm Cat, Tale of the Cat earned four of his five victories at a middle distance, when he was able to take full advantage of his early speed, though he ran the best race of his career in taking the 1997 King’s Bishop with a 113 Beyer.

Horse of the Year Ghostzapper, broodmare sire of Drefong, was extremely fast and could carry his speed a distance, winning the seven-furlong Tom Fool with a 120 Beyer and the 2004 Breeders’ Cup Classic with a 124 Beyer.

Stuart Fitzgibbon, who oversees the management of Gio Ponti’s stud career at Shane Ryan’s Castleton Lyons in Lexington, Ky., said Drefong was not a complete surprise given Gio Ponti’s pedigree, and also because Gio Ponti has sired a lot of athletic horses, an important first step in producing quality runners.

"It’s still early in Gio Ponti’s stud career to make a definitive statement as to what type of horse exactly he will throw, remembering many of Gio Ponti’s brothers and sisters were main-track horses,” Fitzgibbon said. "Also, Drefong may be a throwback to Tale of the Cat, who also won the King’s Bishop. Gio Ponti’s pedigree would encourage the breeder to try dirt, as he himself is certainly bred that way, out of an Alydar mare.

"All [of his progeny] seem to have his good walk and athleticism, and given preliminary results, while they look like grass may be the preferred surface, we will not know for sure until more of his large crops hit the track. It is also worth noting that Gio Ponti as a racehorse improved from a Grade 2 winner as a 3-year-old to a multiple Grade 1 and double Eclipse winner at 4.