In 1793, a Virginian by the name of John Breckinridge was to buy 2,467 acres of prime Kentucky farmland. He named the farm, which would later become known as Castleton, "Cabell’s Dale.” Breckinridge was a dedicated thoroughbred breeder who would himself go on to become a United States Senator and to serve as Attorney General in the cabinet of President Thomas Jefferson. Upon his death in 1806, he would leave one of the country’s finest thoroughbred broodmare bands behind him. 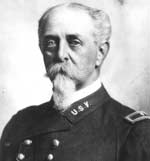 On his death, the property was inherited by his daughter, who was to marry a David Castleman in 1816. It was the Castlemans who would hold title to the land through most of the nineteenth century. In 1840, Castleman built the Greek revival mansion that is still a landmark of the farm. He also gave the farm a name based upon his family’s name—he called it "Castleton.”

Like the Breckinridges, the Castlemans were dynamic forces in Kentucky and they, too, were breeders of horses. The Castleman’s initially bred thoroughbreds, but later became involved with saddlebreds and trotters – marking the farm’s first introduction to a breed that would make it famous in years to come.

The ownership of Castleton passed through a number of hands in the late 1800’s before it was acquired by Wall Street investor James R. Keene. Keene transformed Castleton into probably the greatest thoroughbred farm in the United States at the time – with thoroughbreds such as DOMINO, SYSONBY, SPENDTHRIFT, PETER PAN, KINGSTON, SWEEP, BALLOT, BLACK TONEY, BEN BRUSH (1896 Kentucky Derby winner) , and COLIN originating from its soil.. In 1908, London Sportsman Magazine declared that Keene possessed, "the greatest lot of race horses ever owned by one man.”

Keene exited the business as thoroughbred racing fell on hard times on the ‘20s. For it’s next owner, Castleton would again become a trotting farm - the new owner was David Look, another New Yorker. Look would go on to have significant success with names such as SPENCER, and SPENCER SCOTT (1944 world champion trotting stallion).

During the Depression, Look encountered financial difficulties and finally sold the farm in 1945. In the decades that followed, Castleton was rebuilt and returned to glory under the ownership of Fredrick and Frances Dodge Van Lennep. 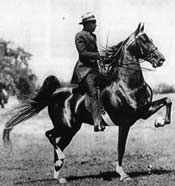 The Van Lenneps invested heavily in both their show horse empire and their standardbred operation, and Castleton was to climb to the top in both disciplines. A well known commentator at the time was heard to remark "Champion may come and champion may go, but most of ‘em come and go to Castleton sooner or later.”

At the head of the show horse class was WING COMMANDER, the six-time World Grand Champion, hailed as the greatest five-gaited show horse that ever lived. The show division was disbanded after the death of Frances Van Lennep in 1971 – but the name of Castleton lives on in the annals of show horse and standardbred history to this day.

In late 2001, Castleton changed hands again when Dr Tony Ryan purchased the farm from the Van Lennep Trust. The farm was again to return to its thoroughbred roots. 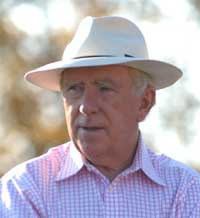 Dr Tony Ryan, an Irish businessman, made his fortune in the aviation industry – initially through aircraft leasing, and subsequently through the establishment of Ryanair – the airline that revolutionized low cost travel for Europeans (in much the same way as Southwest Airlines did in the United States).

On February 10 2004, the breeding shed at Castleton – now renamed Castleton Lyons in recognition of its connection with Lyons Demense, Dr Ryan’s Irish Estate - opened its doors. Castleton Lyons once more finds itself on the map in the thoroughbred breeding industry – and things are only starting…