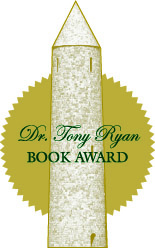 "It is only right to promote the horse through literature." - Dr. Tony Ryan

In 2006, the late Dr. Tony Ryan had a vision for supporting those who promote the Thoroughbred through literature. In a perfect culmination of his love for fine arts and for Thoroughbred racing, Dr. Ryan developed his idea for a literary award that would honor the best books pertaining to any aspect dealing with Thoroughbreds.

As with everything he set his mind to, this would not be done in just any way. He conceived the idea to recognize the best racing-related books published in a given year with $10,000 to be awarded to the winner, a cash prize that competes with literature awards such as the National Book Award and Pulitzer Prize. Nominees from any category may be submitted: fiction,non-fiction, handicapping, children's, breeding, photography, etc., as long as it pertains to any aspect of the Thoroughbred.

Dr. Ryan partnered with the THOROUGHBRED TIMES to promote and coordinate what would be the inaugural Castleton Lyons-Thoroughbred Times Book Award in 2007. Now in it's fourteenth consecutive year the Dr. Tony Ryan Book Award,since named for the visionary responsible for its inception, still remains one of the richest literature awards in the world.

To be considered for the 2019 Dr. Tony Ryan Book Award please complete and return the following entry form: